Think Before You Font 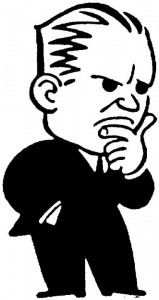 Sometime around the end of last week I walked into the office and before I could even sit down at my desk my colleague and fellow 123Print writer Shannon was all but levitating off the ground in a state of near-panic. “You have to look at the new calendars page on the site right away,” she exclaimed nearly breathless. I expected that maybe there was a typo we didn’t catch in proofing, perhaps an honest misspelling that spell-check “fixed” into a NSFW four-letter word, but no. It was worse. Right there in the headline was the most egregious of all things typography – the headline font was Comic Sans.

Several expletive-laden phrases later and I was surrounded by our entire web design team who, after several expletive-laden phrases of their own, realized and assured us all that the appearance of said distasteful font on our beloved web site was merely caused by one little misdirected line of code on the page that was easily fixed. With two potential crises – having Comic Sans on our site and thinking that or normally awesome designers actually used Comic Sans on purpose – averted; the sheer shock of seeing Comic Sans on a page of 123Print.com and how ridiculous it looked made me think about how and what people think of when they do choose what fonts to use online and in print.

One of the things you hear people say about a font is the personality it brings to the message. According to what I was taught when learning about design; personality and appearance, along with readability, are about the most important considerations in font choice. The personality argument is often used in defense of the use of a font like Comic Sans. “But it makes it look fun and personable” people will say. You can’t argue with that. But what you can argue with is not only whether the personality trait being referenced is appropriate for the situation, but also what its other personality traits end up conveying. Yes folks, if something has a personality, even a font, it’s bound to have more than one trait and while they may all be similar they can all give off different messages.

Since we’re already picking on poor ol’ Comic Sans, we might as well keep beating it while it’s down as an example of what I mean. While most people will probably agree that Comic Sans is indeed a fun and friendly sort of font, most would also likely agree that fun and friendly isn’t the personality one would want to convey for a serious business like a law firm. On the other hand, fun and friendly might be appropriate for a business like a comedy club. Now, let’s think about other traits you could see Comic Sans as having. One might be not serious. That would probably be okay for a comedy club. However another one might be juvenile or child-like. Hmmm – if the comedy club in question was targeted at families with kids and featured comics who specialized in performances for the grade school crowd that too would probably be okay. However if the comedy club targeted adults with comics whose material was risqué, off-color and mature; anything that gives off a child-like personality is not likely a great idea.

Product Labels: 5 Tips for Putting these Silent Salesmen to Work for You