(Google) Court is now in Order 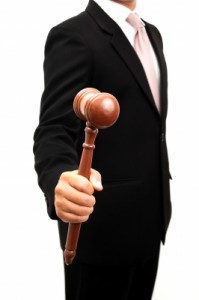 Ever since Google penalized the guest blog network MyBlogGuest.com last month for unnatural links, there has been plenty of buzz surrounding the topic of guest blogging. Not surprisingly, questions such as “was the penalty justified?”, “should publishers working with the site also have been punished?” and “does guest blogging still hold value?” have rapidly followed. But while these and many related topics are important, I continue to find myself wondering about the due process of law before and after the Google gavel falls.

First let me explain what I mean when I refer to violations in this post.  I am referring to those spam related ‘crimes’ that are of the highest sort. I mean those violations that we in the real world would call felonies. In Google’s world these would be akin to manual penalties: punishments that can result in the de-indexation of a whole domain (this is rare) or result in significant ranking losses (this not so much), traffic losses and revenue losses.

For starters, whatever happened to habeas corpus and why is there so little communication between the prosecutor and defendant? Why aren’t the accused websites given the opportunity to plead their case before they are sentenced instead of waiting until after the damage has been done? As it currently stands, webmasters have to accept Google’s punishment, and then go about rectifying the situation. I’ve been involved in cases where companies have woefully tried to plead their case to Google even after the fact, only to find no viable path of communication.  The last resort is usually the reconsideration request field in Webmaster Tools. Here, you hope the webspam team member looking at your case will take the time to read what you have written.  If you are lucky they might grant you a few sample links, but don’t expect a pardon anytime soon. Some will argue there is no need for Google to give webmasters a chance to explain their actions or to even communicate with those they suspect because the evidence (backlink profile) is obvious.  Spammy links are spammy links-right? This may be true, but sometimes it not about definition of a spammy link but rather understanding why it’s there.  Take, for example, the case of negative SEO. This is something that is incredibly hard to prove (which is probably why Google seemingly ignores its existence) but shouldn’t websites still have the opportunity to do attempt to do so before they are punished and before that website loses traffic and revenue? Which brings me to my next observation: why not have a public trial for those accused domains? I’m not advocating a Matlock re-enactment for minor rule violations, but rather a place where charges from Google are posted and the accused is given an area to post a statement in their defense. Naysayers will say, “but what about a business’ or webmaster’s right to privacy? Those sites may not want others to know they have been penalized or why.” Actually, we already find out about such cases, albeit in an unorganized if not alchemical fashion.  It may start with a search in Google for the offending domain which *POOF* is no longer listed. However, more cases than not, the news appears in a tweet from the Grand Wizard, which states a certain domain has been punished for an unspeakable yet tweetable crime. And so the investigation begins and details slowly unfold until everyone has pontificated on how and why this ever happened in the first place. So why not publish these violations on a Google website somewhere? We could call it www.google.com/gotcha. There Google could educate webmasters with a few real examples from the pending case; show what the domains have done wrong and allow the accused to publically issue a defense on the same website (and not make me continually refresh Ann Smarty’s Twitter feed). In the end Google will still have the final say because it’s their sandbox.  But why not have full disclosure? In doing so webmasters would not only be enlightened about the violations but also on the punishment.

Speaking of punishments, since we are changing the system, why not loosely define what penalties are given for which violations. A lot of times, trying to figure out how long a site will be penalized is like trying to guess next week’s weather forecast. Don’t get me wrong, it’s great that Google tells webmasters why they are being penalized and what they should do to resolve the problem, but let’s go one step further. Why not apply a timetable to the situation? For example, certain violations receive an average penalty period of ‘x’ if precautions are taken to remove the spammy links. This is probably too systematic and would also burst the bubble of those webmasters who would hold on to hope that they could cure the backlink profile in a few hours, submit a reconsideration request the next day and have the site to where it was a week later (probably not going to happen). Nonetheless, it would allow those webmasters to better prepare for the situation. If it’s an ecommerce site, a timetable would at least give the business time to find alternative means of getting visitors to the site or at least to prepare for the worst.

I readily admit a lot of my suggestions are utopian, unrealistic and not going to happen.  Still, it shows that Google, which prides itself on things such as usability, trustworthiness, authority and which openly condemns censorship no less, still has many things it can do on its end to help advance all of the above.

10 Steps To Start An Online Business