The Battle of Merry Christmas vs. Happy Holiday (Business Edition)

Who knew seasonal greeting cards could cause such controversy? Might I add, how ridiculous. I was raised in a Catholic household; not overly-religious, but church on Sundays was a regular practice throughout my childhood. Yes, we celebrate Christmas, and yes, we send Christmas cards, even in this highly digital era. This is not to say I advocate for a card that says merry Christmas over one that provides a more generalized salutation like season’s greetings to include multiple belief systems.  Holiday cards, whether those that highlight the actual holiday of Christmas or ones that provide an alternative verse like season’s greetings are both very popular in the United States. But what is the purpose of any of these cards? At their purest of intentions, it’s to let those around us know that we are thinking of them during a joyful time of year – a time of year that holds the value of family and friendship in the highest regard.

Surveys conclude that about 92% of Americans celebrate Christmas. That’s a lot! But that leaves 8% divvied up among other holidays throughout December and early January – with some not celebrating any holidays at all. So for those who don’t celebrate anything during this time of year, should we just send and say nothing? I don’t think so. The practice of wishing someone some form of a seasonal greeting is just plain polite, it’s a nice gesture. Some non-celebrators of Christmas don’t take offense to the words merry Christmas but understand that the person wishing them the greeting does, in fact, celebrate the holiday, and merely wants to share the joy. Even wishing people happy holidays has religious implications, as the word holiday is derived from the Old English phrase holy day, but now can be applied to several dates of jubilation.

Of the 92% of Americans that celebrate Christmas, 81% are not even Christian. For many, Christmas holds little to no religious meaning. But it is still one of the most widely searched seasonal terms on Google, well above happy holidays (see below).

But the question is, in knowing that other beliefs (or none at all) are centered around a specific time of year, should we be conscious of this fact and remain more inclusive? Many Americans think so, especially when it comes to their business relationships, and are adopting more universal seasonal phrases.

What holiday message do businesses choose?

We compiled extensive data examining the use of phrases like happy holidays, season’s greetings, and merry Christmas in business-related greeting cards. First, we created a Google Survey that posed the question:

If you send seasonal greeting cards on behalf of your business, why would you choose a message that includes the word Christmas or an alternative option like happy holidays?

We applied the Google Survey to 500 small business owners. After receiving their responses, we organized the data. We created a response scale from one to five that showed the options selected for specific holiday card messages. The number (1) represented universal holiday messages like season’s greetings or happy holidays and (5) represented holiday phrases that actually included the word Christmas, such as merry Christmas. See below for additional details.

After creating the scale, we broke the responses down by gender, age, and region (see below). Additionally, using our own professional data, we took the top industries that purchase greeting cards from 123Print, along with our other brands CardsDirect and Brookhollow, and determined their preferred holiday message (see below). We also measured the rise or fall in popularity of phrases like season’s greetings, happy holidays, and merry Christmas over time. 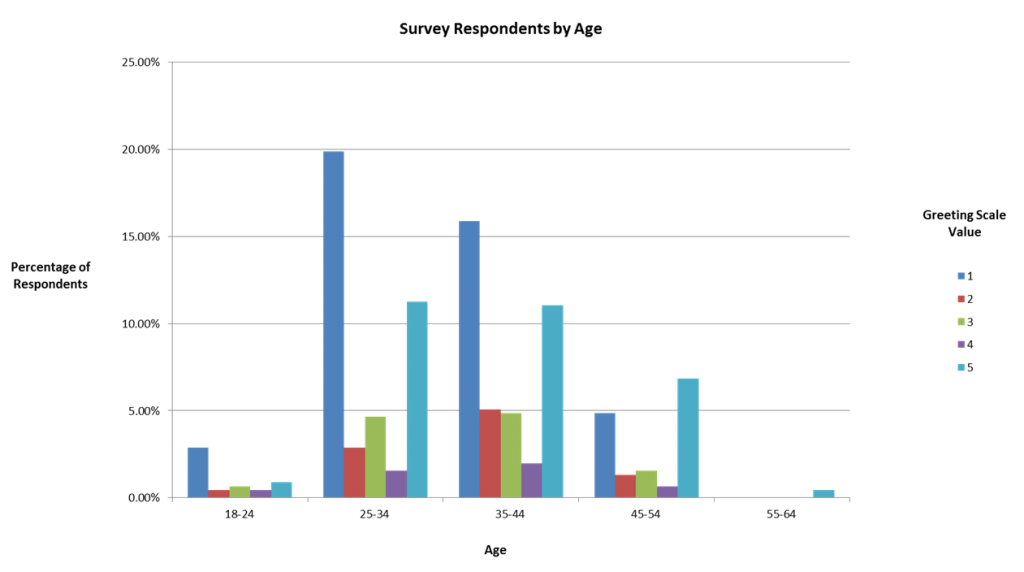 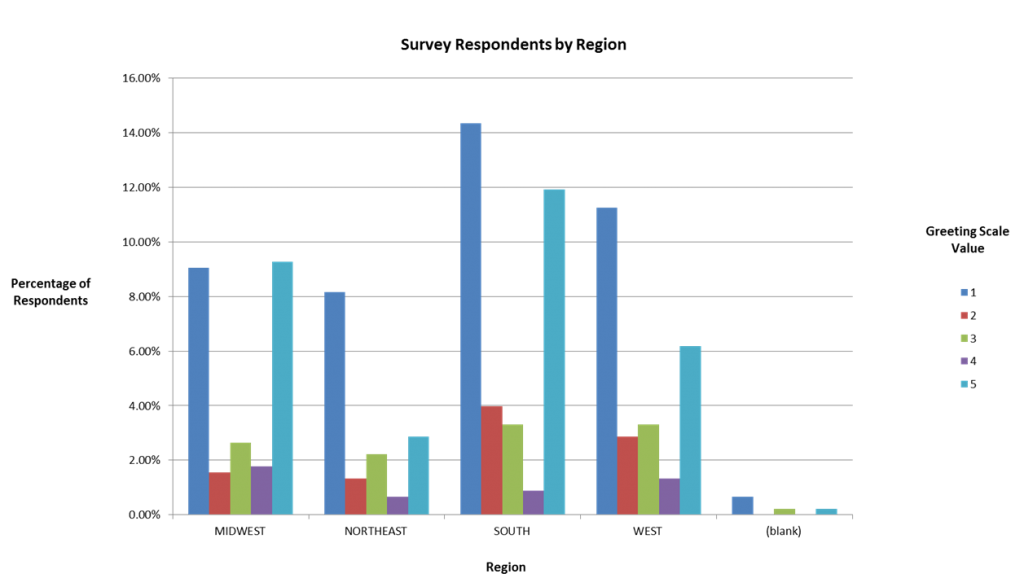 When we examined various regions, the only area of the country that chose a Christmas message over a universal holiday message was the Midwest, and it was still very close. 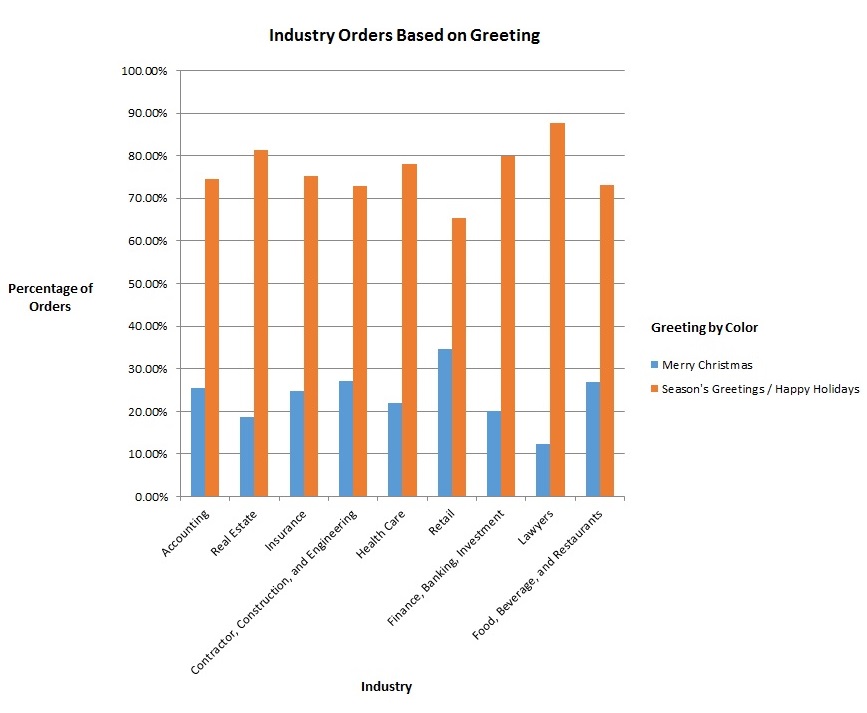 There have been spikes in the purchase of cards that say merry Christmas, especially over the past year, but non-Christmas terms like season’s greetings and happy holidays still dominate the market.

What is the logical response to your holiday messaging?

So what does this all mean? I believe businesses are just being smart. This isn’t a war on Christmas, this isn’t a matter of democrat or republican, it isn’t even a matter of religious or non-religious. Most businesses do not know the beliefs of each customer or every employee – so they play it safe – they opt for an all-encompassing message of happy holidays or season’s greetings rather than a message of merry Christmas.  For many, it just makes more sense.

One of our respondents wrote:

While I celebrate Christmas, like so many other people, I would choose to use happy holidays when sending business greeting cards, because there are many religions that celebrate year-end holidays. They deserve the respect and the kind salutation letting them know we are thinking of them during the holidays, just as much as people from the same belief system as us.

Another respondent sends multiple greeting cards at the holidays and wrote:

We are in a predominantly Christian area of the country. We would have more upset that we didn’t use Christmas than those offended that we did use that term. We do have customers from other religions, though, which is why we send more than one type of card.

While your personal holiday cards to friends and family may very much remain ‘merry Christmas,’ business holiday cards command a different level of reasoning. The idea here is to respect your customers and employees, if not for a moral obligation then for the sake of your bottom-line. Ultimately, it is up to you to decide how best to do this, and what phrase will be most appropriate.